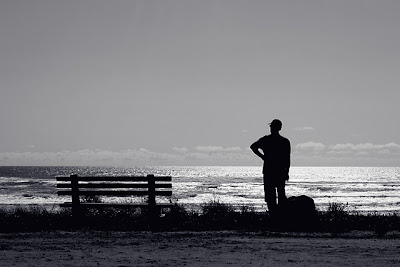 In distant lands they will remember me.
They and their children will survive
and they will return.
~Zechariah 10:9

We arrived on the Isle of Iona, Scotland in the morning fog with silver mist hanging on the white beaches as the ferry made its landing. Heading northward towards the abbey, we stepped along cobblestones through the little island village, past the ruined convent, along the ancient cemetery. It was there next to those gravestones when I saw the bench inviting us to sit and reflect. The wood back was carved with the simple inscription: Rest and Remember: an invitation to the weary traveler’s soul. Sit for a while. Catch your breath. Take a short break. Look out across the silver sea. Watch the day emerge as the sun sparkles in the dew-heavy grass. Rest. Listen as the abbey bells call us to return. Rest and remember.

Remember the year 563, the year Columcille (a.k.a. Columba) arrived from upon the shores of , cast away from the emerald isle for killing fellow Irishmen in battle. Columcille was no soldier. He was a monk. Sentenced to life exile from , he arrived at Iona with twelve other men, founding the first monastery in the land we now know as . Within his lifetime, the people of embraced this new faith, a way of forgiveness, even for our enemies; a faith inspiring the unruly highland clans to love their neighbors in ways which were as radical for that time as they are in our own day.

Remember. Think of the thousands upon ten thousands of travelers coming across oceans, over mountains, by boat, by land, by sea, through the centuries, coming to this island to rest and renew. They keep coming. The day we departed from , hundreds of pilgrims poured out of the ferry like schools of herring in the saltwater surrounding the isle. What are they coming to find? What do they seek on this rugged, barren , just two miles wide by three miles long? Rest. Remember.

Return to the bench called “Remember“. Sit here and rest. Watch. Listen. Reflect. Hear the rhythmic song of the sea upon the shores of . These singing sands have known the incoming and outgoing tides of humanity for the past fifteen hundred years. They were witness to the murderous raids of the Vikings in 806, killing 68 monks of at the bay just south of the ferry landing. To this day, the place is called Martyr’s Bay. The restaurant overlooking that bay is also named after that terrible day, Martyr’s Bay Restaurant. Remember.

Rest and remember. Trace the shoreline northward to the abbey church, rebuilt in the 11th century by the Benedictines after two hundred years of Viking raids had decimated the island population. Walk visually along the path leading from the abbey church to the graveyard, a path known locally as “the Road of the Dead”. Pause for a moment to ponder St. Martin’s high cross, one of the few remaining of the Celtic high crosses on , a fifteen foot high stone, carved with interwoven patterns of Celtic design. Once, hundreds of these Celtic crosses marked this landscape. Reflect upon the passing years. See the thousands of mourners as they have processed, year after year, from the abbey church to the graveyard in honor of a fallen saint, monk, priest or king. Watch the crows hunt for grubs among the tombstones at Reilig Odhrain, the sacred burial ground, holding the earthly remains of 48 Scottish kings, including Macbeth’s victim, King Duncan.

We travel to distant lands, sometimes simply to sit and remember. We traverse among the ancient stones, along the paths of the dead, to think about those who walked this path before us. In this is we discover once again better how to live and love. In this is our soul’s rest and return.