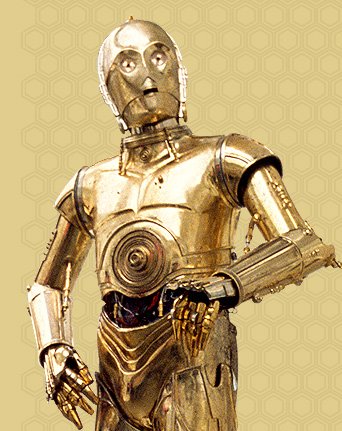 Of the lead characters in the original Star Wars movie, the quirky C3PO captures the pinnacle of new computer technology: a robot that is fluent in over six million forms of communication, able to interpret diverse linguistic data across the galaxy and logically give you the exact odds of survival as you face impending disaster. The only problem is you can’t get the guy to shut up.
C3PO is a literal motor mouth, offering non-stop practical suggestions for every situation, arguing with R2D2 about every move, and forever worrying about his joints rusting. In one of my favorite scenes in the film, C3PO offers a delicious alternative to all his normal fussiness. During hyperspace travel, he informs the crew he’s going to take a mechanical break. “If you don’t mind, I think I’ll shut down for a while.” With the push of a button on his metallic frame the machine shuts off. Like C3PO’s metal body, the silence is golden.
Where can a human get one of those switches? Ever had one of those days when you arrived home from work exhausted, settled into the newspaper on the couch, drifted off for a brief ten minute nap and woken up three hours later, wondering if it’s time to get up for work, confused why it’s dark, only to realize it is ten at night. You’ve found the C3PO button.
Actually, shutting down involves more than merely taking a nap. That’s the easy part. Anyone can take a nap. Kids do it. Grandpa does it. Cats and dogs do it. Oddly, when you’re five years old, adults force you take naps and you resist. When you’re an adult, you want to take naps but you are so busy there’s no time for such luxuries. Even adults who have no kids have a hard time taking naps. Overworked adults consider naps the proper activity of children and the elderly. Active American adults who nap are viewed as lazy or sick. Pretend to doze off during your lunch break in your cubicle at work and watch your workmates raise their eyebrows and talk behind your back. Naps are for babies. Naps are a waste of time. Maybe you should have stayed home if you have the flu. Why don’t you just take the rest of the day off.

Busy people get embarrassed when they see you napping. Instead of asking questions about their own workaholism, they jokingly shame you about activating your C3PO button. Fortunately, as C3PO well knows, there are other options in the galaxy. Consider the Italians. Every working day in , the banks close from noon to two. Most workers head home for a two hour midday break, including a plate of pasta and a nap for dessert. The afternoon shift begins around three and lasts until around seven. This is the norm for big corporations, little family run business and for rural farm workers. It’s the Italian way.
One of my favorite Italians, Francis of Assisi, was known for withdrawing from the 13th century rat race and “shutting down for a while”. He found solitude in abandoned churches. He feasted on silence by fasting from speech. In the biographical film on the life of Francis, Brother Sun, Sister Moon, Italian filmmaker Franco Zeferelli captures the essence of the life of a saint found in silence. One of Francis’ life long friends, Bernardo, has come down to San Damiano church to try and convince Francis to give up his foolishness and return to . As Francis listens to the lengthy discourse he continues what he was doing, rebuilding the ruined church building, stone by stone. Finally, Francis looks up and speaks. “Words, words, words, Bernardo. I too once believed in words.”
When we are dead and gone, what will people remember from our lives. I doubt it will be our words. For better or worse, they’ll remember our character. Francis was known to say, “Preach the love of God, and if necessary, use words.” We communicate our lives through our character, lifestyle and our actions long before a single word emerges from our lips. Listen to the wise words of the ancient sage from the Book of Ecclesiastes: Do not be quick with your mouth, do not be hasty in your heart to utter anything before God. God is in heaven and you are on earth, so let your words be few.[i]

There lies the real challenge to shutting down. Find that button and you’ll make C3PO look like a rusted pile of scrap metal. For thousands of years, people have shut down by simply knowing when to zip their lips. Who hasn’t offered “the sacrifice of fools” and regretted it later. Better to learn to listen. Better to value silence and let our lives speak for themselves without the need to fill the gap with words. Cultivate the holy and healthy habit of napping without guilt. Like C3PO, on occasion, we are wise to value the golden silence among the crew as we zip across the galaxy at the speed of light.
[i] Ecclesiastes 5:2.