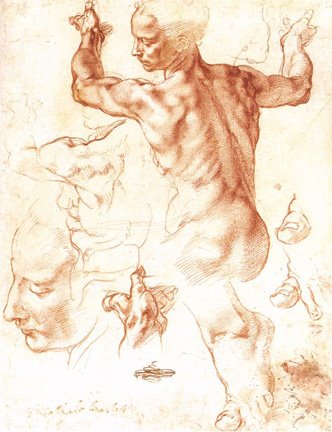 When Michelangelo began work on the Sistine Chapel, his first drawings were not on a ceiling but on scraps of paper called “primo pensieri”, or “first thoughts”. Art historians estimate he drew over one thousand of these scribbles, doodles, sketches and cartoons. Fewer than seventy of them survive. Then again, who keeps napkin art? Seen any framed legal pad doodles recently? Ever kept your loose sheets of scribble drawings after playing an evening of Pictionary with friends? This type of drawings do not count as real art in most people’s books. Michelangelo even thought so it seems. Few were saved.
Michelangelo’s primo pensieri carried more value than anyone dreamed possible at the time. If people knew what they would be worth in five hundred years, they would have kept them in bank vaults. Their worth is a lot more than mere current value at Sotheby’s auction. As biographer Ross King writes in Michelangelo and the Pope’s Ceiling,
Fresco painting called for numerous preparatory stages, but among the most vital and indispensable were the drawings by which designs were worked out and then transferred to the wall. Before a single stroke of paint could be applied to the vault of the Sistine Chapel, Michelangelo needed to produce hundreds of sketches to establish both the intricate body language of the characters and the overall composition of the various scenes.(1)
There’s something about King’s phrase, “Before a single stroke of paint”. The vital, even indispensable work behind the scenes of any great creative work involves first thoughts, those fleeting ideas we have regarding a new venture in life. We don’t think much of these loose scraps of paper, the bits and pieces of our grand plan. Yet, without our primo pensieri, there will be nothing but blank plaster over our heads when people come into our lives.
Of course, Michelangelo’s first thoughts were no mere stick figures or doodles, but detailed studies of human anatomy with a tender pathos in their duotone simplicity. Thankfully, various assistants in his studio grabbed up a few of scrap papers from his studio floor, preserving some of his cartoon studies for posterity.
The question for us has nothing to do with how we will be remembered in five hundred years. We leave that to God. But here’s a great idea from the past. Dare to have first thoughts. Begin today. Scratch out a few lines on the back of an envelope. Doodle a grand concept on a napkin. Daily scratch out a few more first thoughts. Those stick figures marching across your legal pad just may show you the way into the world of your dreams, and into the plans that God has for you, plans to give you hope and a future (Jeremiah 29:11).
(1)Ross King, Michelangelo and the Pope’s Ceiling, (New York, NY: Walker & Company, 2003), 81.
Art image: Study for Libyan Sibyl, by Michelangelo; red chalk drawing; 1510-11

Doodle Light image above and photo of the week below are both by Stefan Robinson.