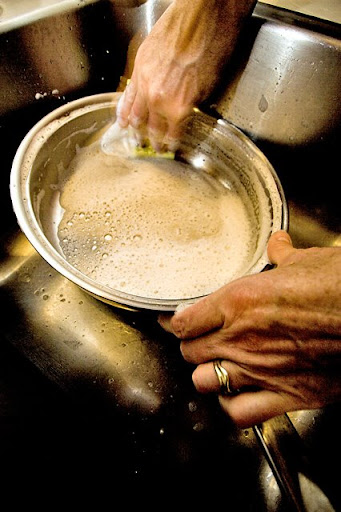 The time of business does not with me differ from the time of prayer, and in the noise and clatter of my kitchen, while several persons are at the same time calling for different things, I possess God in as great tranquility as if I were upon my knees at the blessed sacrament. ~Brother Lawrence [i]

I’ve worked a fair share of kitchen odd jobs. My first paid employment as a teenager was in a kitchen at Grace and Eddy’s Café along Highway 18, on the way up to . Grace the waitress wore her hair on top of her head in a beehive. Eddy the cook was a chain smoker. I refilled mustard and ketchup squeeze bottles, restocked the freezer when deliveries arrived, broke apart boxes and cans for recycling, and washed pots and pans.

I worked several college summers as a dishwasher at a Steak & Ale restaurant. During those summers I discovered the joy of abandonment to an unpleasant task as God gave me the attitude of delight in doing small things well, including washing dishes. My final two years of undergraduate studies, I lived and worked as a house boy at a sorority house at the of in . Once again, I was a dishwasher and kitchen helper. During those years, I first began to learn the lessons of everyday spirituality with mop in hand. How can a person pray while at work? Is it possible to transform our work into a way of prayer?

One Sunday night after a full day of prayer and fasting, I was going through the motions of mopping the kitchen, not really caring how well the work was being done. An inner voice, that true voice of conviction, asked me who I was working for. The cook, of course, I replied, who did you think? Think again. Peeved at this voice, I confessed aloud that I was doing a sloppy job of my kitchen duties and would attempt to improve for the sake of Christ, my true Boss. A Bible verse rang in my mind as I set down the mop, picked up a broom to first sweep the kitchen floor, making sure the job was excellently:

Whatever you do, work at it with all your heart, as working for the Lord, not for men, since you know that you will receive an inheritance from the Lord as a reward. It is the Lord Christ you are serving. [ii]

It was during those same college years that I first read a small paperback book titled “The Practice of the Presence of God”, by Brother Lawrence, the patron saint of the kitchen. This humble lay brother of a monastery in taught that prayer is simply practicing the presence of God, especially within the everyday world.

Brother Lawrence, named Nicholas Herman at birth in 1611 in , , came from humble origins and had little if any formal education. He served in the French army during the Hundred Years War, until, in his thirties, he was wounded in battle. After his recovery, he was discharge from the army and decided to work in a monastery in , serving the next forty years of his life as a lay brother, working mostly in the kitchen, washing pots and pans. Once in this monastery he took up the name by which we know him today, Brother Lawrence. Though he never wrote any books and left behind no great deeds, he is widely regarded today as one of the greatest voices of the Christian spiritual life, largely by the widespread popularity of the little volume published after his death, “The Practice of the Presence of God”. This thin book offers a collection of conversations and letters, inviting us into the kitchen of the soul where we can discover the secret of the spiritual life,

What is Brother Lawrence’s secret? Do everything you do, especially the little things, for the love of God. Expect to encounter God everyday, in the midst of daily chores such as washing pots and pans in the kitchen. Practice the presence of God daily, delighting in God’s presence throughout the day.

As put it, “Lift up your heart to Him even at your meals, or when you are in company, the least little remembrance will always be acceptable to Him. You need not cry very loud: He is nearer to us than we think. To be with God there is no need to be continually in church. Of our heart we may make a prayer chapel, wherein to retire from time to time and with Him hold meek, humble loving converse. Everyone can converse closely with God, some more, others less: He knows what we can do. Let us begin then”.[iii]

The next time the dishes pile up in the sink and begin to overflow onto the counters, return to that prayer chapel of the heart right there in the kitchen. As you scrub pots and pans, soak in the presence of God, enjoying ‘meek, humble converse’ with God, as Brother Lawrence reminds us, the God whose ‘treasure is like an infinite ocean’.

2 thoughts on “HOLY POTS AND PANS”