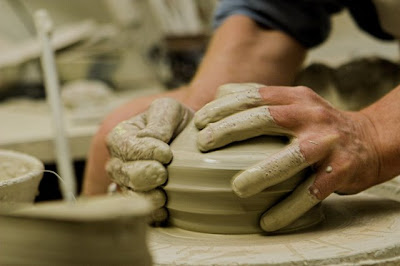 One of my friends, Jay Stewart, is a professional potter. Jay makes throwing clay pots on a wheel look easy. As someone who owns a pottery wheel, I know that throwing clay shapes on a wheel is difficult, bordering on impossible. I’ve taken pottery classes to learn to do the impossible. After about ten hours of instruction during the first three weeks of classes, I’d finally made something that looked like a pathetic coffee mug without a handle. The potter-instructor did not allow us to keep anything for the first several weeks. Whenever we triumphed over the dueling forces of gravity and centripetal motion by successfully raising a cylinder, the instructor came along with his wire and cut the pot in half to reveal the inconsistency of our walls. He was a good teacher, knowing full well that weak walls in a pot would not withstand the pressure of the kiln.

Pottery is one of the oldest crafts known to humanity. The Bible describes God as a Potter who shaped Adam out of clay and breathed life into his nostrils. The name Adam, in the original language, literally means ‘red clay’. Humanity is an odd mix of earth and spirit, designed and inspired by God. Perhaps as a way to return the favor, nearly every human culture since prehistoric times have left evidence of pottery as part of their daily life. Pots have been used for millennium to carry water, store food, cook, hold grain, wash, bathe the body and even bury the dead. Hearth, home, thirst, hunger, comfort, preservation, survival and death. All these are associated with pottery from ancient times. The first appearance of a potter’s wheel was 6000 years ago in the . The oldest glazed and fired pottery dates back to 5000 years ago in . To this day, all around the world among developing people, pottery ranks as one of the most essential trades in a village.

In the time of the prophet Jeremiah, the LORD told him to “Go down to the potters house, and there I will give you my message”. So Jeremiah went to the house of the potter to learn important life truths from the hands of the craftsman in clay. Jeremiah observed the potter center the clay upon the wheel, open and shape the clay into the form intended. “But the pot he was shaping from the clay was marred in his hands; so the potter formed it into another pot, shaping it as seemed best to him.” Then God declares to Jeremiah a prophetic word to pass along to his people: “O house of , can I not do with you as this potter does? Like clay in the hand of the potter, so are you in my hand, O house of .”

One of my earliest personal connections with ancient pottery involved a pot made in 75AD in southern . In 1976, as a second year college student, I was studying archeology in southern . Part of the class was to work at an archeology dig, the site of a Roman trading post at a major crossroad in ancient times. Our work was to scrape away a quarter of an inch of dirt at a time from our square meter within the site and report anything we found to the British archeologist heading up the place. I ran into a pot from , easily identified by the unique markings about the rim. The pot was about the size of a grapefruit and had not been touched by human hands for 1900 years. There it sat in my hands, exposed to the light of day after 19 centuries lying buried six feet below the surface of an English field.

Since that time, I’ve purchased my own potter’s wheel and kiln, and made various awkward attempts at throwing clay pots. As I’ve come to learn, all wheel pottery can be understood by three basic movements of clay: centering, opening and shaping. Get these three movements of the spirit figured out and you’ll also know Jeremiah’s secret to the spiritual life: our lives are in good hands, the hands of the Master Potter. By the way, if you are ever in Cannon Beach, Oregon, drop to visit my potter friend’s shop, aptly named, House of the Potter.

1 thought on “HOUSE OF THE POTTER”