I said, ‘I have been banished from your sight;
yet I will look again toward your holy temple.’

Our world has too many refugees, too many displaced peoples, too many lives banished, too many forsaken children. I’ve been reading Karin Evans’ beautifully written book, The Lost Daughters of China: Abandoned Girls, Their Journey to America and the Search for a Missing Past, telling stories of the millions of orphaned baby girls in China, a very small fraction of whom are adopted by people in the west. She writes of an official government document describing the fate of one girl: “This little girl was found forsaken on a winter day in a local market when she was about three months old.”[i]

Found forsaken. Too many people in our world are found forsaken. There are an estimated 45 million displaced people in our world, including over 15 million refugees who have fled their countries, and 29 million internally displaced persons.[ii] Some refugees have lived in bare survival refugee camps for decades, raising their children to adulthood in wretched conditions. Among these refugees, Syrians account for 2.5 million who have fled Syria into neighboring countries, and an additional 6.5 million internally displaced people living away from home within Syria.[iii]

Every human has a story worth hearing. If one of our planet’s refugees arrived at your door, and you invited them in, they would have a story to tell that is worth hearing though difficult for our ears to hear. We’ve been blessed as we welcomed several such refugees into our home over the years, including people from China and Sudan. I often think of the people who volunteer to serve in refugee camps, such as Zaatari, a refugee camp in Jordan near the Syrian border, with an estimated population of 144,000 refugees.[iv] How do you bring help and hope, day after day, to a city of needy people without sufficient life-giving resources such as clean water, food and medical care?

Jonah’s story is also a story of refugees, banishment and those found forsaken. The Assyrians were well known for their brutality, marching into neighboring countries such as the small country of Israel, and forcibly displacing hundreds of thousands of lives by violence, exile and totalitarian domination. War and violence continue today to be one of the leading causes behind the refugee problem world-wide.

Jonah’s personal story is self-exile, an attempt to run away from God. In Jonah chapter two, we hear Jonah praying to God as one banished from God’s sight. Again, Jonah prays the Psalms, picking out a piece from Psalm 31 which declares, “I am cut off from your sight.” One of the most powerful prayers of those found forsaken comes from Psalm 22, a prayer recited by memory by Jesus from the cross.

My God, my God, why have you forsaken me?
Why are you so far from saving me,
so far from my cries of anguish?
God hears the cry of the forsaken. Through the love of God revealed in Jesus’ life, death and resurrection, anyone found forsaken who cries out to God for saving grace is welcomed home. God’s eyes smile upon all who pray to God in times of suffering. Look again towards God’s holy temple. Bring before God’s gaze the people of this world who are banished, exiled, displaced or forsaken. When in a dark place, we then look into the eyes of God, God “keeps us as the apple of God’s eye”, gazing into our lives, eye to eye.[v] When we look up in prayer into the brightness of heaven, our eyes are flooded with light, the light of life. As Jesus teaches us, “The eye is the lamp of the body. If your eyes are healthy, your whole body will be full of light.”[vi] 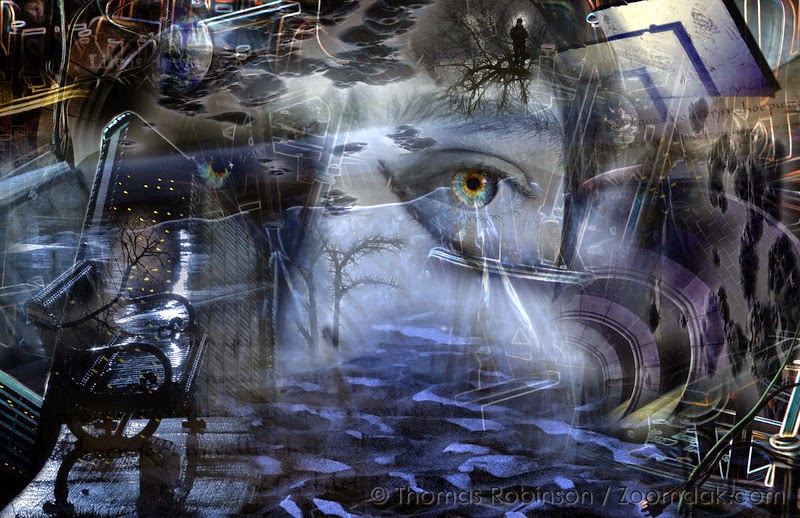 “Looking Into”, by Thomas Robinson
Thomas writes about his digital image “Looking Into”: This is a compilation of about 30 images into about 50 layers merged together to create the depth I am always looking for. Through its imagery, it speaks both of fallen nature of humanity and the glory found in creation. It also asks questions of today’s society. Much of the text overlaying the piece is from the rule of St. Benedict, from part of the prologue speaking about people who live a transient lifestyle – drifting from one realm to the next. This questions the viewer to spend more time looking into themselves and into the issues of the world around them.
See www.zoomdak.com
[i] Karin Evans. The Lost Daughters of China: Abandoned Girls, Their Journey to America and the Searchfor a Missing Past (New York, NY: Tarcher/Putnam, 2000), 78.
[ii]See Refugees International at http://www.refintl.org/get-involved/helpful-facts-%2526-figures, Also see http://www.globalpost.com/dispatch/news/war/130619/refugees-worldwide-numbers-stats-displaced-people-afghanistan-somalia-sudan-syria-iraq.
[iii]See http://www.mercycorps.org/articles/iraq-jordan-lebanon-syria/quick-facts-what-you-need-know-about-syria-crisis.
[iv] See http://en.wikipedia.org/wiki/Zaatari_refugee_camp; and also David Remnick’s August 26, 2013 article in The New Yorker at http://www.newyorker.com/reporting/2013/08/26/130826fa_fact_remnick?currentPage=all. For a wider view of the refugee populations, see “The Fifty Most Populous Refugee Camps Story Map” at http://storymaps.esri.com/stories/2013/refugee-camps/.
[v]Psalm 17:7.
[vi]Matthew 6:22.