And the Lord commanded the fish, and it vomited Jonah onto dry land.

I find this verse one of the funniest verses in the Bible. I also marvel at this moment in Jonah’s life for the future sign this would become to all looking for God’s saving grace.

If you were given the commission to paint the central figure over the high altar of the pope’s chapel in Vatican City, who would you paint into that position of highest honor? This was the challenge Michelangelo faced while painting the Sistine Chapel ceiling, 1508-1512. The very last of 343 figures he painted over four years on the Sistine Chapel ceiling is his answer to this riddle, the figure of Jonah.

The moment Michelangelo chose in Jonah’s life to depict in this central place on the Sistine Chapel is from Jonah 2:10, just after Jonah is vomited onto dry land. What may seem like a strange choice for this position of honor comes clear when you hear Jesus describe his death and resurrection as fulfillment of the sign of Jonah. Religious leaders came to Jesus asking him to give them a clear sign of his spiritual authority. Jesus told them the only sign he would give is the sign of Jonah. Here’s how the Gospel of Matthew records this conversation:

Then some of the Pharisees and teachers of the law said to him, “Teacher, we want to see a sign from you.”He answered, “A wicked and adulterous generation asks for a sign! But none will be given it except the sign of the prophet Jonah. For as Jonah was three days and three nights in the belly of a huge fish, so the Son of Man will be three days and three nights in the heart of the earth (Matthew 12:38-40).

Just as Jonah was “three days . . . in the belly of a huge fish”, even so, Jesus died, was buried “in the heart of the earth,” and was resurrected on the third day. The sign of Jonah is the death and resurrection of Jesus, the heart and center of the Christian faith, worthy of being painted high above the high altar on the Chapel in the heart of the Vatican.

What is amazing about Michelangelo’s vision though is how he portrays Jonah. Newly vomited up, with the great fish looking on, Jonah leans way back as if he’s thunderstruck, with his feet off the ground, staring upward, the only of the seven Old Testament prophets to look upward, staring in wonder at God soaring above, marveling at God’s creation and at God’s holy history depicted all across the ceiling of this holy place. Jonah looks truly stunned by God’s glory radiating across creation and across the centuries.

Then look at Jonah’s hands. Reaching awkwardly back to his right, Jonah gestures with both hands down and backward, pointing at something, trying to get our attention, pointing us to some mystery. What is Jonah pointing at?

Jonah’s right hand, slightly below his left hand, points further downward to the scene in the lunette just below the Esther pendentive, a scene of the cross of Christ bringing eternal salvation and glory to many in the last judgment of Christ. Jonah points with both hands to Christ’s saving grace offered to all who come to Christ.

When first viewed the Sistine Chapel in 2005, I had just finished reading Ross King’s marvelous book, Michelangelo and the Pope’s Ceiling, and stared up at this ceiling with a face looking almost identical to Jonah’s face over the high altar. Everyone around me was awestruck at the ceiling 60 feet overhead. The place was designed and built as a place of worship, and still is used for this purpose today, a place to point people, just as Jonah points people, to Jesus Christ, to his death, resurrection and saving grace offered to all. 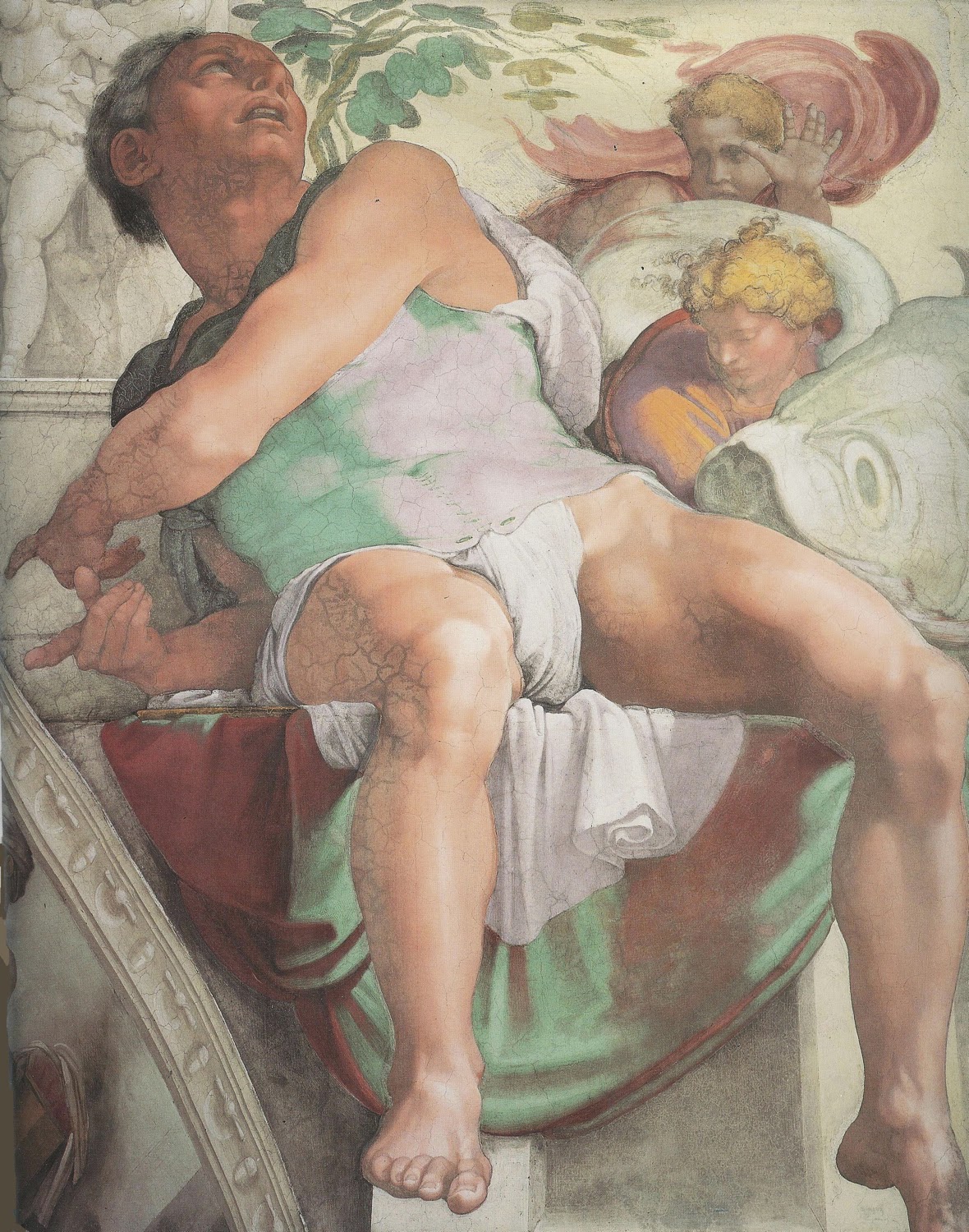