“Go to the great city of Nineveh and preach against it, because its wickedness has come up before me.”

I am a “country mouse”. I love going into the city, but do not feel at home there. I know there are many “city mice” people who feel at home in the city. Unlike most of humanity living on planet earth today, I live in a rural place. In the past century, the world’s population has shifted to the city.
As I wrote in Ancient Paths, “According to the U.S. Census, in 1890 nearly 70 percent of Americans lived in rural America. A century later in 1990, 75 percent of the population lived in cities. The percentage of the American farm labor force dramatically dropped from 40 percent in 1890 to 2 percent in 1990” (see Ancient Paths: Discover Christian Formation the Benedictine Way, Paraclete Press, 2010, page 131). According to the United Nations State of the World Population Report from 2007, for the first time in human history, more than half of the world’s population now live in an urban center.
So the ancient call to Jonah to “go to the great city” gets my attention. While the mass migration to urban centers continues world-wide, I still love living in a village, in a quiet, rural place by the sea.
Jonah also lived in a small, rural place. Jonah was called by God to go to a great city; and not just any city. Nineveh was the capital of the Assyrian empire, the most powerful empire on the planet in Jonah’s time, and the hated enemies of the Jewish people due to their brutality, military conquests of their neighbors, including the ancient Jewish people. So this call to Nineveh was more than making a trip to the big city to go window shopping at Christmas time. By contemporary maps, ancient Nineveh lies just 20 miles to the west of modern day Mosul, Iraq. The trip to Nineveh from Israel requires walking a mere 600 miles.
Once he arrived, Jonah was asked to preach against Nineveh. I have no idea how much public speaking you’ve done in your lifetime. Most people are not too excited when offered the chance to speak in front of others. Preaching as one form of public speaking carries with it the added weight of speaking on behalf of God, declaring to people the Word of God. As someone who has preached weekly for decades, I know some of the inner challenges a preacher faces week after week, wondering if we are really up to this daunting and humbling task.
There are many types of sermons. Jonah was asked to preach a sermon of judgment, to “preach against” wickedness in Nineveh. Step into this second verse of the Book of Jonah with your heart, and take note of how you’d respond if asked to go into a large city you’ve never visited before, stand on a street corner, and begin public speaking, with the content of your speech all the evils of that society, troubles of that city, and all forms of wickedness found all around you. Some will cheer, some will jeer, most will ignore you thinking you are just weird and intolerant.
Like Nineveh, the great cities of the world today are full of troubles, including many forms of wickedness, corruption, evil, darkness, human degradation and suffering. The lists of troubles are long when we walk the streets of any city in the world: homelessness, addiction, homicide, pornography, domestic violence, child abuse, malnutrition, inadequate clean water, human trafficking, corruption, despair. In the great cities of the world it is not “all good”.
Into this strange world we are called to go with our lives, to bring God’s truth and God’s love. No easy task. Person to person, heart to heart, home to home, we are called to go, to receive the Word of the LORD, and respond with faithful, compassionate hearts for the hurting, broken people of this world, including over half the world’s population who live in one of earth’s great cities. 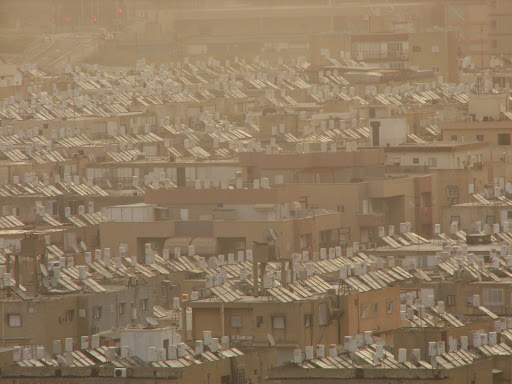 Bat Yam, a suberb of Tel Aviv, Israel; photo by D. Robinson
NOTE: this Jonah Project features one verse from the Book of Jonah each week for a year, beginning December 2013, with reflections upon Jonah’s life and our call to listen to God’s Word, and follow God’s call to enter into this troubled world with God’s gift of compassion.