Then the Lord sent a great wind on the sea, and such a violent storm arose that the ship threatened to break up.

One of my favorite children’s stories, At The Back of the North Wind, written by George MacDonald, a poor boy named Diamond meets a beautiful lady, the North Wind, who takes him on wild journey’s through the air and helps him better know the nature of true goodness. Diamond admits, “I don’t quite understand you, North Wind.” “Well, I will tell you,” explains the North Wind. “If you see me with my face all black, don’t be frightened. If you see me flapping wings like a bat’s, as big as the whole sky, don’t be frightened. If you hear me raging ten times worse than Mrs. Bill, the blacksmith’s wife–even if you see me looking in at people’s windows like Mrs. Eve Dropper, the gardener’s wife– you must believe that I am doing my work. Nay, Diamond, if I change into a serpent or a tiger, you must not let go your hold of me, for my hand will never change in yours if you keep a good hold. If you keep a hold, you will know who I am all the time, even when you look at me and can’t see me the least like the North Wind. I may look something very awful. Do you understand?” “Quite well,” said little Diamond.

In our verse this week, the LORD sends a great wind upon the sea causing such a violent storm to arise that the cargo ship bound for Tarshish threatens to break up.

In December 2007, our coastal community on the north Oregon Coast faced such a storm, with sustained winds of 125 miles per hour for a period of 24 hours. Ships seeking to come into the Columbia River from the ocean rode out this storm several miles offshore, clocking winds of over 140 miles per hour on board. This storm came from the west, off the Pacific Ocean, blowing onshore, knocking down whole forests, tipping over most of the power poles in our county, leaving us without electricity for nearly a week. We refer to that storm as the “Great Gale” of 2007.

A reader of the Book of Jonah may wonder at what kind of God would cause such trouble and harm. As we journey with Jonah through his grand adventures, we will get to know more of this God. But we “must not let go our hold of him”.
Jonah not only let’s go his hold on God, but attempts to flee from the LORD. He goes down, down, down: to Joppa, to the harbor, onto a ship, into the hold of this cargo vessel, and down into the raging heart of a violent storm upon the sea. Jonah’s flight from God has plunged him into peril upon the open ocean. The few times I’ve been on a ship in a storm were not pretty. I get seasick on a calm day.

There are many ways God gets our attention in life: sometimes with a whisper; sometimes with a great storm. C. S. Lewis wrote in The Problem of Pain, “We can ignore even pleasure. But pain insists upon being attended to. God whispers to us in our pleasures, speaks in our conscience, but shouts in our pains: it is his megaphone to rouse a deaf world.”

Jonah’s heart is so deaf and hardened to the troubles of the world that even this great storm upon the sea will not rouse him. What storms have come your way this past year? What has roused your attention, helping to move you out of sleepy comfort, speaking to your conscience, causing you to cling more closely to the great hand of our compassionate and good God, even in a storm? 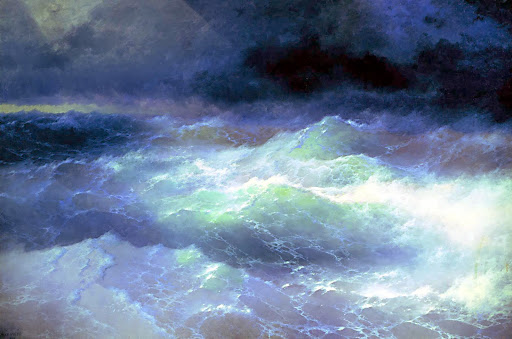 “Among Waves” by Ivan Konstantinovich Aivazovsky (1817-1900), of Feodosia, Ukraine. I saw this amazing 8’x20′ painting in Feodosia in October 2012 at the Aivazovsky Museum, on the shores of the Black Sea.