Jonah 1:7
Then the sailors said to each other, “Come, let us cast lots to find out who is responsible for this calamity.” They cast lots and the lot fell on Jonah.
In our world as in the ancient world, some important decisions are left to chance. Consider the beginning of the Super Bowl game every year, where the opening possession is decided by a coin toss as over 100 million viewers around the world look on. We seem to enjoy casting our fate into the hands of God.
Literally, the casting of lots was something like rolling dice for the purpose of discernment or decision making. Very little is actually known about how it worked. Some think “lots” were flat bones or ceramic pieces, colored black on one side and white on the other. Black/black, black/white or white/white all meant something different. I recall drawing straws as a child, where a series of different length straws are placed in a hand with all the tops at the same height, and the bottoms concealed. The one who drew the longest straw got first pick.
In ancient religion, this is usually called “divination”. People have used many unusual devices to determine the will of God or the gods, depending upon the belief system. Many modern board games and playing card games have their roots in systems of divination, a historic fact which has caused some religious groups to ban cards and all such games of chance.
So when the sailors try to sort out the cause of “this calamity”, the terrible storm that is trying to destroy their ship and their lives, they turn to the casting of lots. When I put myself on deck of that ship at that moment, I seriously wonder how they accomplished the feat. Perhaps they gathered around in a tight huddle, holding onto one another, lest one is thrown overboard, while one threw the bones into a ceramic pot. Somehow, on deck, as this cargo ship pitches and rolls in high seas, the sailors have the clarity of mind to roll their dice and discover the culprit. And surprise! “The lot fell to Jonah.”
Though casting lots comes up a lot in the Bible (more than 70 times), the last time casting lots is mentioned in the Bible is in the New Testament, in the Book of Acts, chapter one, when the early church casts lots to choose a replacement for Judas.  Two men were nominated. “Joseph called Barsabbas (also known as Justus) and Matthias.” Then, as the narrator Luke tells us, they prayed, “Lord, you know everyone’s heart. Show us which of these two you have chosen to take over this apostolic ministry, which Judas left to go where he belongs.” Then they cast lots, and the lot fell to Matthias; so he was added to the eleven apostles.
With the coming of the Holy Spirit in the second chapter of Acts, the church continued to pray, but retired the long standing practice of casting lots. Unless, that is, it is time for kickoff. 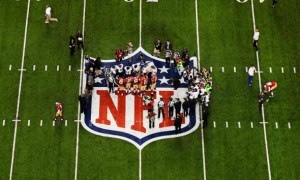