Jonah answered, “I am a Hebrew and I worship the Lord, the God of heaven, who made the sea and the dry land.”

A stranger came up to me recently and announced, “There’s a little boy that lives inside of this earth-suit that doesn’t want to grow up or grow old. Enjoy the journey!” This man was in his late 70’s, with playful blue-boy eyes, and a kind smile.

When you look inside, who do you see? Who am I? Who are you? How do you introduce yourself to others? Yesterday, I sat with 200 strangers on a flight from Portland to Chicago. The couple sitting next to me was from Eastern Europe. The man across the aisle was reading a book in Japanese on his smart phone. Last night, I checked into a hotel next to Chicaco O’Hare Airport to attend a week-long class. I went down to the hotel restaurant for a late dinner. The dining area was full of people I didn’t know. They were laughing, conversing, working on laptops, watching ESPN, drinking beverages. Sitting alone in that crowded place, I wondered, if I went around to every table in that restaurant, what questions I would ask others, and what I would want most to know about the people sharing that time and place with me.

We all have an identity, or perhaps multiple identities, though few truly know who they are. We spend lots of energy in our early adult years trying to discover who we are so that we can get on with what we think we are supposed to  do. We spend our energy thinking we are one person, only to find out years later that we’ve been pretending, or going through the motions, and we come to discover that we’re someone quite different.

When Jonah is asked identity questions, he replies as though he had memorized this answer at an early age and had been reciting these words without thinking ever since. He answered: “I am a Hebrew and I worship the Lord, the God of heaven, who made the sea and the dry land.”

Remember the setting. Jonah is aboard a cargo ship heading 3000 miles, east to west, across the Mediterranean Sea to Tarshish. A terrible storm blows and threatens the lives of everyone on board, including Jonah, the runaway Hebrew prophet. Traditionally, Jews have always been people of the land, and tend to avoid the sea.

Traditionally, Jews have called themselves Hebrews, a term of mysterious origins. The people of ancient Israel were known as Hebrews, especially prior to the time of King David, a term likely derived from Ivrim, or Ibhrim, plural for the biblical word Ivri (עברי), which means to pass over or beyond. The “Ibhrim”, Hebrew people, are those who passed over or came from beyond the river. Jonah identifies himself as a descendant of Abraham, Isaac and Jacob, part of the ancient Semitic clan of peoples known as Hebrews.

Oddly though Jonah also identifies himself as a worshiper of the Lord, or YHWH, the holy name for God given to Moses at the burning bush, a name which means “I am who I am.” Before this God, we take off our sandals or shoes, and bow down to worship, for we are in the presence of the Holy One.

Then Jonah further describes the Lord as “the God of heaven, who made the sea and the dry land.” This is creedal language, a short-description of God stated as a creed, a simple statement of faith, as would be recited by a community of faith in a worship service.

Jonah’s creed also states that he worships the God who made the sea and the dry land. As the Psalmist sings,

The sea is his, for he made it,
and his hands formed the dry land.
Come, let us bow down in worship,
let us kneel before the Lord our Maker.[i]

If God truly is the maker of the sea, the One who formed the dry land, then whether we are upon the sea or standing on terra firma, our life purpose is to worship before the Lord our Maker. This is what Jonah says. But this is not what Jonah does.

My undergraduate degree at the University of Washington in Seattle was in comparative world religion. Over thirty years later, after talking with thousands of believers from many different religions, I’ve discovered a common disconnect in the human soul between what we say we believe and how we act out our faith. Often, in faith, our words do not match our actions. Many people who profess faith in God are functionally atheists. That is, at a functional level in their daily lives, they act as though God does not exist, even though in their words they declare themselves to be people of faith in God. This pattern is also sometimes known as “nominalism”, or “in name only”.

If Jonah truly worshiped the Lord, the God of heaven, who made the sea and the dry land, why is he running away from God? Though Jonah professes faith in God who made the sea, the very God who sent this terrible storm upon this sea to get the attention of this runaway believer, he finds it very hard to bend his knee before this God in true worship.

What we say is important. But of greater importance to God is who we are. To God, there’s a child who lives within us all, a child who is on the journey of a lifetime. 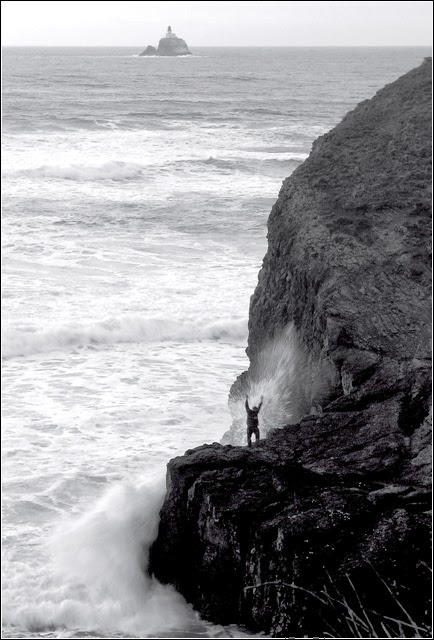