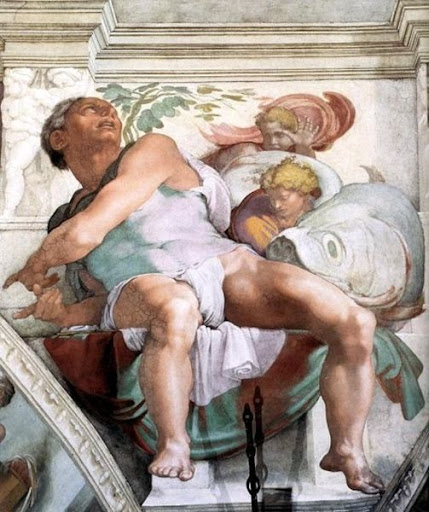 Guard your steps when you go to the house of God. Go near to listen rather than offer the sacrifice of fools, who do not know that they do wrong. ~Eccl. 5:1High above the altar in the Vatican Sistine Chapel, Jonah leans back in awe, staring dumbstruck at the scene spread out before his eyes, mimicking hundreds of faces below. Visitors to the Sistine Chapel enter through a door sixty feet below Jonah. People’s faces usually look like Jonah’s. We’re amazed at the wonder of that ceiling. No colorplate reproduction or tourist guidebook can prepare you for Michelangelo’s marvel.

After a few minutes of open mouthed staring most people have the same response. We want to talk, to tell someone, to try to explain it. Talk, talk and talk some more. We hunt around for words that express our amazement and wonder. We launch into mouthfuls of words. Friends and strangers alike exchange tidbits of knowledge we’ve gathered from reading Michelangelo and the Pope’s Ceiling by Ross King, or from seeing The Agony and the Ecstasy. We want to inform people that Charlton Heston got it all wrong in the movie. Michelangelo didn’t lay on his back to paint his marvel, but stood on scaffolding he designed himself. In that place of worship, people love to assert opinions on the church, politics, culture, history. All this talking is in a dozen or more languages. Italian, Spanish, German, French, Korean, Russian, English, Japanese, just to name a few I heard in the hour I stood in that place. Add all these conversations together and visitors quickly turn the Sistine Chapel into the .

In the hour I stood in that place, the decibels inched their way up the frescoed walls, gradually filling the room, building with a slow but perceptible crescendo of increasing noise.The Vatican officials post signs in a dozen languages as well as in pictograms outside the Sistine Chapel asking for silence in the Chapel as you enter. This is not merely a museum for gawkers. Everyone knows this upon entrance. We have no excuse except our common excuse: we are all human. We love to talk about transcendence, even if it is only sixty feet above our heads. We easily forget that we have entered a sacred space designed for worship of God.

Whatever is out of our reach fascinates us. After the first ten seconds of stupefied silence, we fill up the next hour with verbiage. We love pouring forth our words in an attempt to explain what lies beyond words. To curb our verbal excesses, the hires ‘silence police’ to serve in the Sistine Chapel. Their main job is to usher talkers back into silence. They have a variety of techniques for controlling the noise of onlookers. The first and most frequent technique is the “parent to child” method of shushing. When that fails, they move on to hand clapping. These rapid fire outbursts get the crowd’s attention but are only effective for a few minutes. The third stage in silencing the talkers is human shouting. SILENCIO! As this sound breaks suddenly into the room it seems so out of place that people really to stop talking for a few moments. Finally, when all else fails, they play a recorded message on a public address system, politely but loudly asking all of us to shut up in about five languages.

The odd thing about each of these methods is they make noise, a lot of noise. Oxymoronic! Yelling at people to be silent has always seemed slightly odd to me. The shushing feels like we’ve all returned to first grade, which is not far from the truth if you compare the stick figure artistic abilities of most of us talkers compared with the genius soaring overhead. Maybe a return to childhood is not such a bad idea. As I stood in silence for the better part of an hour beneath Michelangelo’s creation, I tried to kept out of range of silly adult diatribe, seeking to avoid empty words of cynicism, unbelief and critical analysis. Every time the silence police hushed these voices, I felt a wave of relief to have such empty adult speech silenced.

When we cross the threshold into a sacred space canopied with brilliance and wonder, we find we’ve returned to a place from our childhood, a place of wonder, imagination and silent delight. In that place, words are no longer required, only childlike delight at beauty, imagination and creativity. Thank God for the ‘shushers’. The silence keeps calling us back from our banality, back from our grown up pedestrian world, back into the world of Jonah-like wonder at the sublime vision soaring high overhead.