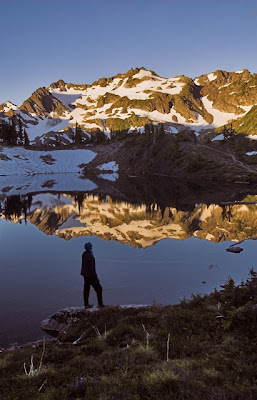 Let them trust in God who does not fail those who seek Him with a simple and righteous heart; nor will He fail to impart what is needful for the way until getting them to the clear and pure light of love…. The attitude necessary…is to allow the soul to remain in rest and quietude even though it may seem very obvious to them that they are doing nothing and wasting time…. They must be content simply with a loving and peaceful attentiveness to God. ~ of the Cross

Make a little experiment. Walk outside your house. Try to find one square inch of quiet in your corner of the woods unbroken by human noise. How far would you have to travel to get to such a place? For the past 25 years, this has been the quest of Emmy award winning sound recorder, Gordon Hempton, who has recorded the sounds of nature on nearly every continent.

Sitting on a moss covered log in the heart of the Olympic National Park, Hempton, sets up his sound recording microphones and meters to listen, claiming the Olympics to be the quietest of all our national parks. According to Hempton, our silent spaces are dwindling. “In 1985”, writes staff reporter Lynda Mapes of the Seattle Times, “[Hempton] recorded 21 places in state where natural quiet was unbroken by noise intrusions from 15 minutes or more during the daytime. By 1989, there were only three.”[i]

The most aggressive invader of natural quiet spaces? The jet airline industry. Alaska Airlines alone accounts for more than 30 flights over Olympic National Park per day. By happy accident, Olympic National Park happens to lie west of most of national and international flight patterns. Still, the scarring sound of jet engines accounts for the most disruptive human sounds heard in the Olympics.

Over the past few years, our family has enjoyed fifty-mile backcountry treks into the heights of Olympic National Park. We practice “leave no trace” camping, packing out all our garbage and literally leaving no trace of our presence, preserving the space for the next camper. The jet airline industry does not believe in “leave no trace”. During our recent week-long family vacation in the Olympic backcountry, the natural quiet was interrupted several dozen times a day by jet airplanes. Long after their five minutes of roaring had cleared the skies, their vapor trail was still evident as it dissipated thousands of feet above our heads.

We spend days of hiking, carrying all our gear and food in backpacks, in order to arrive at serene alpine meadow, twenty-five miles from the nearest parking lot. There we sit, listening to the footsteps of a Great Blue Heron stalking frogs along the lakeshore. We hear the peeping of a Water Dipper chick looking for her mother and the tune in to the symphony of bees gathering nectar from alpine wildflowers in that pristine wonderland.

A jet airplane flying overhead in such a place is like a kid burping for five minutes during a church service. It’s like that annoying person sitting in the seat behind you at the symphony, the guy who keeps clearing his throat and finally gets out a throat lozenge, only to spend several irritating minutes crinkling the wrapper before getting the lozenge into his mouth. It is like a group of kids noisily giggling over magazines in the corner of the public library while you’re quietly trying to do some research. You get the idea.

Sound invasion goes on all the time. According to Hempton, natural quiet is so rare that most people under age of thirty know nothing of the experience. “Whenever someone tells me they know a quiet place, I figure they have an undiagnosed hearing impairment, or they weren’t really listening,” admits Hempton. “Most people believe they know what natural quiet is, but they have not had the experience; it is not the same thing as sitting in an empty theater, a church, a library.”[ii]

Sound engineer, Ron Sauro of , convinced me that we are raising a whole generation of young people who are hard of hearing due to listening to loud music through earphones. He explained to me the physiology of our sense of hearing. Sound waves vibrate the meadows of cilia in your ear canal, setting off signals which are sent along to your brain. When you expose your ear canal to intense decibels of sound for too long, the cilia break off and do not grow back. Oddly, the hearing most commonly lost due to excessive exposure to high decibels is the middle range, the range of the human voice.

In my experience, humans tend to be uncomfortable with silence. Try it out the next time you get into a good conversation with a friend: experiment with periods of silence from your side of the conversation. See how your friend responds to the gap, how quickly he attempts to fill the gap with words. In quietness and trust is your strength, but you would have none of it (Isaiah 30:15).

Spiritual seekers welcome silence, both the outward form of natural quiet in places such as the Olympics as well as that inward form of creative silence found through such practices as meditation and journaling. “We spend our lives in containers”, observes Hempton. “Cars. Buildings. Planes. Natural quiet is in open, living space. It’s alive.” His current campaign is with airline executives, attempting to reduce the number of flights per day over the Olympic National Park. Like those visionary folks who set apart our national parks in the last century for future generations, Hempton strives to preserve and protect the gift of silence, declaring to anyone who will hear: “Quiet places are the think tank of the soul.” There we begin to learn not only to listen but to truly trust in the Voice of the Shepherd of our souls.

1 thought on “SPEAKING UP FOR SILENCE”