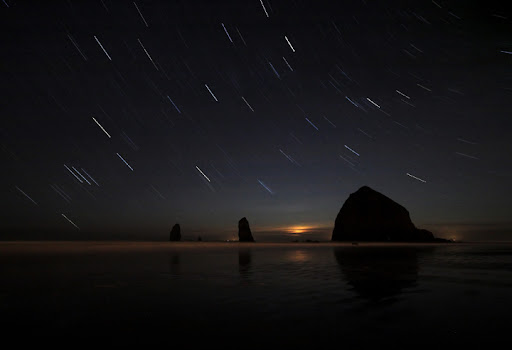 The day had been very hot by coastal standards, with the thermometer well into the 90s under a cloudless sky. After a long summer of misty days in the low 60s, the heat was a welcomed change. Near midnight, we found our feet following dune paths to the sea to walk under the sea of stars swimming in the deep blue firmament overhead. With little human light pollution to obscure the sky, the shy stars revealed themselves by the millions, with mother Milky Way leading the festive throng across the brilliant night sky. Low tide invited us out westward, far beyond the dunes, into the wet flat-sands reflecting the stars above.
As though walking upon the stars, our feet felt none of their sharp points of light, but glided silently over the surface of the deep. With every foot fall, phosphorescence sparkled underfoot, like fireflies dancing in the wet sand, or light fairies from some long-forgotten sunken Altantis. Luther spoke well when he declared, “God writes the Gospel not in the Bible alone, but also on trees, and in the flowers and clouds and stars.” My mind recalled the song of the morning stars as expressed in the Song of Creation, found in Job 38.

Where were you when I laid
the earths foundation?
Tell me, if you understand.
Who marked off its dimensions?
Surely you know!
Who stretched a measuring line across it?
On what were its footings set,
Or who laid its cornerstone—
While the morning stars sang together
And all the angels shouted for joy?

“We need to find God, and he cannot be found in noise and restlessness. God is the friend of silence. See how nature – trees, flowers, grass–grows in silence; see the stars, the moon and the sun, how they move in silence… We need silence to be able to touch souls.” So wrote one who touched the souls of millions, Mother Teresa of Calcutta, one of God’s bright stars shining in the  darkness of the night of human suffering. Out under the night sky, walking among stars, our souls find their place in the universe once again, tiny yet brilliant, shining “like stars in the universe as you hold out the word of life” (Philippians 2:15-16).

2 thoughts on “WALKING AMONG STARS”